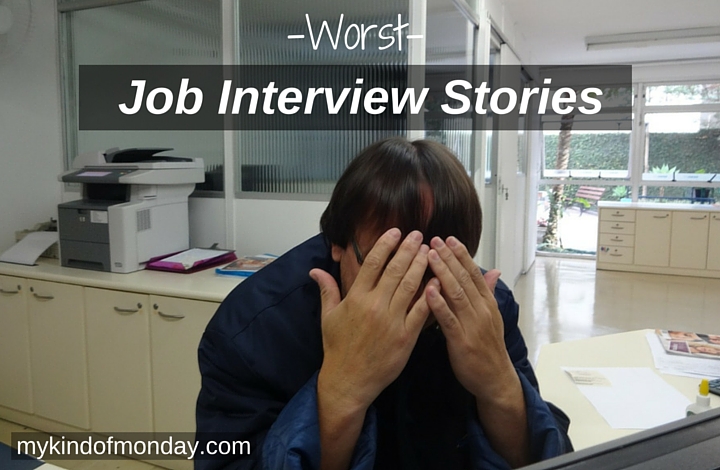 Reddit can be a great place to go to get answers and advice on pretty much any topic you can think of. If you need some advice on your CV, or the type of interview questions you should prepare for, Reddit users are usually on hand to help. It can also be incredibly entertaining.

When one Reddit user asked “What is the dumbest/rudest thing you have witnessed someone do during an interview?” they got some great responses. Here are 16 of my favourite worst job interview stories for your enjoyment.

I used to do all the interviews where I worked. I actually had a woman put her head down on the desk during the interview. Complaining about how tired she was. Tried to take a nap. Kept saying pass to questions. Like she was on $25000 Pyramid.

I interviewed someone who took his shoes off in the lobby while waiting for me. He proceeded to take his socks off, hand them to my receptionist, and ask her to throw them away because they “Smelled really bad.”

He was also digging around in his nose when I came out to greet him.

Needless to say I made an excuse not to shake his hand and he didn’t get a call back.

After she found out I was a Marine, asked me if I ever killed anyone.

I was in a group interview with about 8 others at Circuit City. They broke people into small groups to “get to know” the interviewees. One guy thought it was funny to joke about how he once walked out of Walmart with a DVD. Luckily for him one of the interviewers heard and was able to give him a nice escort out.

This guy’s mom drove him to our office building for his interview, which is fine. But then she came in with him to actually do the interview, I would have been embarrassed for the kid but he didn’t even seem to think it was awkward.

I was in a group interview with a girl who spoke in a whisper, yawned frequently, and rest her chin in her hands with her elbows on the table. She even had to lean forward dramatically in order for her elbows to reach the table. Aside from all that, the best part was how she answered the easiest, most typical question you’ll hear when interviewing for a customer service position: Manager: “If you saw a customer who looked like they needed help, would you wait for them to approach you or would you go approach them first?” Stupid girl: “I’d wait for them to talk to me first.” Obviously, she did not get hired.

During an interview I was running for a part-time deskside support position, I asked the candidate where he saw himself in two years with this position. I was expecting a response of having moved from part-time into a full-time position, or moving into a different role within out IT department. Instead he answered with “Not here, because I’m quitting in six months.” The interview pretty much went downhill from there.

I saw someone interviewing for a job at Just Salads who left one headphone in his ear the entire time.

I was assistant manager at a local video rental store for a year. I interviewed a really awkwardly shy girl. Very short answers to all my question, no eye contact ever.

One of the questions we ask is “so what kind of movies do you like?” There’s no wrong answer to this, clearly. We just like to see a little enthusiasm, because a big part of the job is to help customers with movies.

So I ask her and she just shakes her head “oh, I don’t like movies.”

Took me aback for two reasons. 1: who doesn’t like ANY movies? And 2: why would you want to work in a video rental store?

A friend of mine hugged his interviewer after the interview. No call back for him.

The interview was at Barnes and Noble at 8 am. The manager was waiting at the table, the guy walked past her at 8 am and stood in line for fifteen minutes to get breakfast. Then he sat down and started eating during the interview. He said he was not late because he was standing in line.

I once asked a person interviewing me if a person who looked similar to her in a photo on her desk was her sister. It was actually her about forty pounds lighter.

This is why you never stray from the standard, mundane small talk without having a common interest.

During an interview, one of the applicants mentioned that he had a side business building aquariums. He then pulled out a brochure and gave me a ten minute sales pitch to get me to buy a custom built aquarium from him. He didn’t get the job, and I didn’t buy an aquarium.

Guy’s mom interrupted interview to ask how long it was going to take because they needed to leave.

Had a guy walk into the interview on his cellphone. My boss and I waited and waited until he looked up and said “Oh y’all ready?”

I was conducting a group interview for a school organization that mentored other students. One girl actually put her feet up on the table, was smacking gum the whole time, and when we asked a question she said, “I don’t know, can you just tell me the answer?”

I think this user pretty much sums it up:

I’m bad at interviews, but reading these make me feel that much better.