Most of us don’t need a whole lot of convincing when it comes to the idea of bringing your dog to the office. After all, who wouldn’t want to have their best friend beside them while they work away?

Thankfully more and more employers are warming up to the idea of allowing pets in the workplace, as it has been shown to boost productivity, raise moral and lower absenteeism rates.

We take a closer look at the rise of dogs in the office and the benefits provided.

Recently, it has grown increasingly common for people to bring pets to work. In New York City, there are 178 results for “dog-friendly jobs” on LinkedIn, which we take to mean that either employees can bring in their dogs, or they have a designated office dog.

It’s not just small companies or companies in New York that have this pet policy either, big names like Amazon, Google, and Mashable also have pet-friendly policies where employees can bring along their pets on a daily basis.

Reportedly, Google has caregivers on staff for employees’ pets, and the canines at Amazon have dog biscuits available at the reception desk, along with water fountains uniquely designed for them.

As for smaller companies, these now see allowing pets in the office as a non-financial work, helping to generate a perception of a better work-life balance and emotional support, acknowledging the life commitments of their employees, as well as the importance of the human-animal bond that people have with their pets.

The Benefits of Pets at Work

Recent scientific studies are confirming that pets can be beneficial to the workplace. Research conducted by Virginia Commonwealth University researchers in 2012 stated that employees who were able to take their dogs to work reported lower levels of stress compared to their petless colleagues.

Steven Feldman, Executive Director of the Human Animal Bond Research Initiative (HABRI) Foundation, based out of Washington D.C., believes that pets in the workplace that are not a part of an animal-assisted therapy contribute to satisfaction, employee teamwork, and stress reduction. When an employee can bring their pets to work, they have a better perception of their employees and they feel more support from them. Since pets help forge social connections, they are more likely to be team players and collaborate with their peers.

Our four-legged friends also benefit from pet-friendly policies. A study conducted at the University of Missouri-Columbia shows that when a human petted a dog for around 20 minutes, they experienced a blood pressure drop of 10%, and the dogs also experienced a drop in blood pressure.

Also, for a dog, spending the day with their owner is more stimulating than spending the day in the backyard, or home alone. Additionally, a rising trend in pet ownership will have a positive impact on the cost of healthcare in the U.S.

There are lots of benefits of bringing your pet to the office or having an office pet. Some of these benefits include: 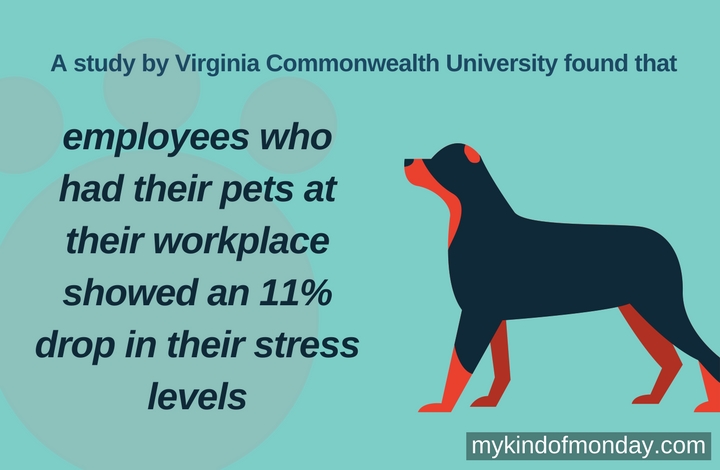 Petting or playing with an animal could increase levels of oxytocin, a hormone responsible for reducing stress, as well as decrease cortisol, the hormone which produces stress. A study conducted by the International Journal of Workplace Health Management found that being around dogs reduced stress levels and was a calming influence, regardless of whether or not you were the pet owner.

A pet or pets in the office can be a great bonding tool. One study found that having a dog at the office brings people together and encourages employees to be more friendly towards each other, be more communicative, and more cooperative.

This seems to support the conclusion that animals may help with social interaction as they are a guide to communication, a natural conversation starter, and help break the ice. Furthermore, the amount of workplace gossip decreases typically with the introduction of a dog, as employees would rather talk about the pets instead of their peers.

As we’ve mentioned previously, dogs can reduce stress, but they can also improve happiness and lift moods.

The benefits of having a pet at home are translated to work when your furry friend is your office companion, and you’re in their company during work hours. The best part of the day for most pet owners after a long day at the office is being greeted by their pet, and when they can bring them with them to the office, they are always near man’s best friend.

As anyone who’s ever worked in an office knows, it’s super easy to sit down at your desk first thing in the morning and get sucked into your work, not realizing until the end of the day that you’ve barely moved.

Recent research has found that sitting down for too long is not good for your health and well-being, as it is possibly linked to premature death, some cancer types, type 2 diabetes, and obesity.

It’s important to take regular breaks and stay active during your workday, which is why having an office dog can be a fantastic benefit, as it forces the owner to take them for walks. Having your pet there gives you the opportunity for exercise, as well as taking a break from your screen and stretching your legs.

A lot of employees will rush home once their shift has ended to go feed their animals and take them for a walk. If the employee has their dog with them at work, there is no need to bolt from their seat at a particular time; they can be more flexible with their hours and stay for longer if required by a deadline or project.

This can be especially beneficial for startup companies, which tend to work long hours while wanting to support their staff as much as possible. Allowing dogs to come to work ensures the employee’s happiness while providing an environment where productivity is increased. 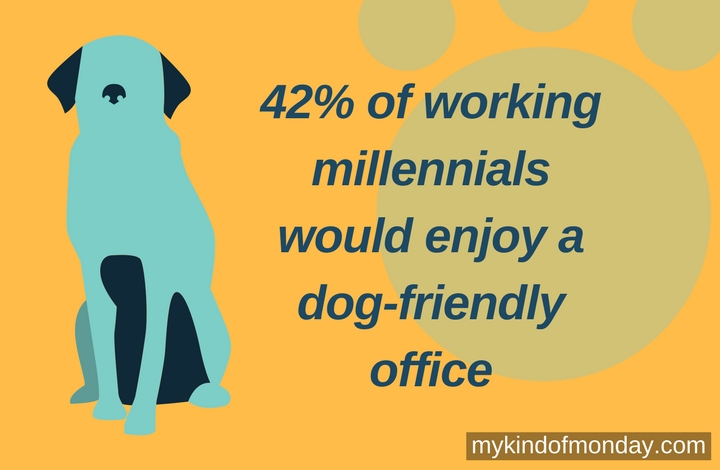 Millenials are the new workforce, and they have been known to choose a dog-friendly company over their competitors when other worker compensations are similar. These young adults can tend to treat their dogs like their children, so a dog-friendly office environment is a big perk. For them, it can easily outweigh other perks such as free snacks or daycare.

Lots of companies can push the same employee perks and company culture as a recruiting message during their process, but that’s not what always makes the difference. Allowing dogs in the workplace gives companies the chance to reach millennial dog owners, which in turn gets them more engaged and productive employees.

As we mentioned earlier, the benefits aren’t just for the employees; they’re also for the pets!

Dogs don’t be like to be left alone for long periods of time, and it’s not fair on our companions to do so. When you allow employees to take their pets with them to the office, they won’t have to worry about them being alone all day, and have to hire a pet sitter or someone to take them for walks.

As with anything, there are also some cons to go along with the pros. When you have dogs running around an office, some of the drawbacks can be scuffles with other dogs as well as some accidents on the floor. There may also be some issues with noise when meeting with clients or conference calls, but all those problems can be managed with aware employees and well-trained dogs.

Perhaps the biggest issue is that a dog-friendly company can miss out on having someone allergic to dogs on their staff, but most businesses report that the benefits of pets in the workplace outweigh all potential issues.